Some people like to belittle the world of franchise films and wonder why movies are constantly expanding universes and sequels and I’m here to tell you it is because of ME because I saw 4 movies this month and they all ruled and all were part of massive franchises. So, in the order I saw them…

Spider-Man: Into The Spider-Verse

I’ll save you from scrolling too far south on this post: This was the best movie I saw this month. I took my kids, knowing this was going to be a better Spider-Man adventure than Infinity War. My big gripe with IW is of course that (spoilers!) Spider-Man dies. I figured this would be a better outing for my 7 year old son who loves Spider-Man. Imagine my shock when (spoilers again!) Spider-Man dies in this movie too, in the first act.
But while that was bad, it set up for all these other Spiders to replace him. And it is FUNNY. It is a PG family movie that has action and adventure and is really funny. I adored The Incredibles and its sequel and I am so happy that a very different family super hero movie can join those ranks as a go-to movie for Saturday nights on the couch.
Into the Spider-Verse is visually unlike any other movie I’ve seen. It emulates not just a hand drawn style, but the coloring mimics comic book publishing specifically, even if that kind of coloring wasn’t in use when Miles Morales was first introduced to the world.
When it was over, my son was asking about Miles and my daughter was asking about Gwen, and it seems like there is a Spidey for everyone. Of course a day later all they talked about was Spider-Ham, but they are kids.

Once Upon a Deadpool 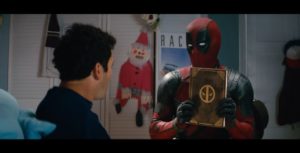 I missed Deadpool 2 the first time around so I jumped at the chance to see it in a way that would differ from a home viewing. The bit with Fred Savage added is a clever framing device for the PG13 edit, but I have to tell you, this still behaves like a very R rated movie. A few *bleeped* F-words and probably some sexual situations subtracted doesn’t make this “family friendly” at all. I’m open to seeing the original cut of the movie now, but kinda hope they double dip for this version on home video too since it was so funny.
Added bonus: added tributes to Stan Lee. The grafitti wall art of Lee was in the original cut, but the new version has an “R.I.P.” added next to his smiling face. Post credits also includes outtakes from Lee’s cameo in the Deadpool 2 teaser trailer.

I swore I wouldn’t pay to see another Transformers movie. Each of the live action entries has been worse than the one before it. I wanted the movies to end either go away or be rebooted. Then Bumblebee. New director, new cast, new style. There is so much going for it. And it worked. I loved it. The opening scene is a high budget CG animation of something we would have seen in the 1986 movie. Decepticons corner the Autbots on Cybertron, forcing them to escape. While this is cool to watch, it also directly contradicts stuff from the previous movies. And as the movie continues, it is a course correction. Bee loses his voice, becomes the VW beetle, and so on, but every time they could lose a convention from the Michael Bay movies, they did. The movie plays like a remake of The Iron Giant, but given how that shapes the tone of the movie and forces it away from Bay’s perversions, I’m fine with that.
Judging by how much has changed in the last six months or so with the movie, it would not shock me if this is the reboot I was hoping for. I liked the 2007 movie, it is imperfect but has some heart and does things we never saw before. If this was the movie we got in 2007, we’d be a lot better off. It now looks like Bumblebee is the “First Class” of this franchise, setting up a new series without the last few lousy entries. 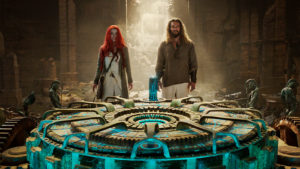 MY MAN.
Its true. We go a PG-13 Deadpool movie. We got the BEST Spider-Man movie from a Sony animation studio. We got a great Transformers movie with no weird sexual stuff. It is a month of miracles.
The biggest miracle of them all is Aquaman. This movie had no business being this fun. Three years ago we saw Jason Momoa holding his breath under water in cell phone footage in Batman V Superman, and I never would have guess that a spin off would spin this far off.
As you know, I liked Justice League, but even I wouldn’t have cited Aquaman as a highlight. He has become kind of a joke with the “My Man!” stuff and the weird lens Snyder and DC cast him through, as a kind of drunk and surly bruiser. By the time Justice League finally came out and under-performed, they were knee deep in making Aquaman a movie and I have no idea what happened. It is as if no one told anyone here that something cost too much or was too big or too wet or needed to be more like whatever other movie in the DC Murderverse. James Wan guided Furious 7 into massive success despite losing the star during filming. It would seem this made him the perfect choice for Aquaman.
This movie is HUGE. Everything is big. At times it is like Star Wars underwater. Then it becomes James Bond. Yeah, theres a little Thor and Wonder Woman in there too. But none of those movies achieve the scale Aquaman moves comfortably in. The movie is constantly establishing rules and customs and devices and to my mind no thread is ever dropped. While the plot is no more or less simple than the average hero movie, it is so dense with activity. And on screen there is what you expect with some big fights and vehicle chases, but I was shocked how much appeared to be practical. Infinity War put Spider-Man and Iron Man and others in all CG suits, and it is kinda off putting watching their unmasked head float above the costumes in some scenes. This movie’s underwater storm troopers have real suits and you can see the difference on screen when they fight or run through a wall or even just walk into a room. Mo-cap an actor wearing nothing but a skin tight suit and they movie different from an actor wearing a suit or armor.
This is the DC Universe with their Iron Man moment. A movie no one expected to be good and a hero with no real big fan base. With Superman and Batman kind of off the table for WB at the moment, they’re forced to try to make the very best movies they can with who they have. Please, a Mera movie next. Then Aquaman 2. Then a Brine King movie. Do not stop.