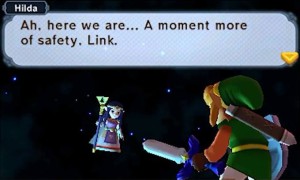 The Legend of Zelda: A Link Between Worlds
I haven’t played a Zelda game seriously in a long time. I abandoned Wind Waker just before the Triforce hunt, abandoned Twilight Princess before I finished the tutorial. I even made some public overtures about the Zelda series being stale and over.

But I never lost love for the portable versions. Phantom Hourglass and especially Spirit Tracks were great fun with inventive gimmicks and story twists to keep me interested.

A Link Between Worlds I played pretty feverishly after getting it back in January as a late Christmas gift. I did the first three dungeons and entered Lorule and promptly put the game down for 6 months. Played a lot more New Super Mario Bros 2 and Mario Kart. I got stuck trying to figure out the next dungeon to go in since I heard you could do them in any order, but it turns out there is at least ONE you have to do first so once I satisfied that I raced to the end. Pretty fun game, though I don’t know if I’ll drop back in and do “hero mode” yet. The overworld being familiar seemed cheap at first, but then I realized knowing the basic lay of the land essentially made it harder to get lost and I passed by secrets more easily as a result. An unconventional difficulty modifier.

Donkey Kong County Tropical Freeze
I had harsh words for DKCR, and this game builds on that unrelenting pace. The first world is fairly simple, showing you how to use Diddy, Dixie, and Cranky and feeding you extra lives like crazy. Then the second world and onward dole out a dozen instant death challenges per stage. I’d get frustrated, but the the truth is the game plays tight and fun and repeating parts of the level rarely get that bad. The graphics are gorgeous. It is honestly the best looking video game I own I think.

Super Metroid
Oh yeah, I got a Wii U and registered a shit ton of old Nintendo games to get coins for Club Nintendo. This was one of the rewards last month. I only played Super Metroid once in 2003 on my old roommate’s cart on a SNES, well after playing Metroid Prime and Metroid Fusion. I really don’t think of this one as being much of a nostalgia trip, even though its been effectively 11 years since I played it first because I was an adult then.

I love how the game never makes fights a challenge. Enemies are speed bumps. If you die in a fight it is because you were unprepared or being reckless. The game is all about exploring and exploiting abilities. If you are playing right, you should be armed with more than enough missiles and have armor strong enough to pass any fight very quickly. The stuff you get stuck on is looking for those upgrades and the routes to the new areas. I don’t just hope Nintendo makes another Metroid game, I hope they make more games like this. Any franchise, any setting, just a game where being clever is more important than being about to aim and fire.