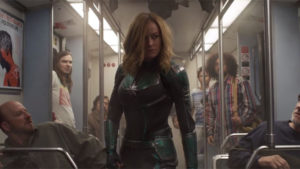 I’ve been a pretty devout supporter of Marvel Studios so far. I think the only movie in the ‘MCU’ I didn’t see in theaters was Doctor Strange. And the majority of the movies in this series I’ve seen on opening weekend. Seeing them near release is for 2 reasons: firstly I am legitimately excited about the experience, and secondly the sooner I see them the quicker I can join in the conversation about them.

So, Captain Marvel. I picked up the first issue back in 2012 because I heard good things. I am a super casual comic fan. My behavior is typically to buy an issue to “try out” a series or arc and then wait a year and buy the paperback. I am perpetually 2-3 years behind on any comic series. Liked this one enough to do that. I read through Kelly Sue Deconnick’s entire run that way. I am not ashamed to say one of the things that kept me coming back was the fandom around it. Seeing the “#CarolCorps online sharing panels from the comics, fan art, cosplay, etc. It was really cool. And this was at a time when the Marvel movies were really starving for gender equality. Fans were pretty quick to call for a Black Widow movie and I really think a big reason behind that was she was the ONLY woman in the Avengers. Back in 2002, Mary Jane just screamed in every single scene of Spider-Man, so things got better, but they still were not great. My most popular tweet made a mockery of Marvel ignoring the character that was in front of their face.

Now I had this character that I could be kinda cool and ‘inside’ with. ‘Oh you like Iron Man? Yeah, My favorite is Captain Marvel, she doesn’t have a movie yet.’ And “yet” was really the operative word there. We had no reason to believe Marvel as a movie company was suddenly going to give a shit, but Carol was bold and didn’t respond well to being told she couldn’t do something so we just followed her lead.

Now after years of anticipation, we are here. And the movie starts off kinda weird? The Kree have been in Guardians of the Galaxy but it was never quite clear what their deal was because we mostly spent time with Ronan who had his own agenda. I am not trying to recap the whole movie here but I legitimately don’t remember what the first 5 minutes or so are. Vers is a person in Starforce. And so is Yon Rogg, Korath, and the Warriors Kree. They go to planet dust because Skrulls. These guys are shapeshifters and that is scary.

It probably wouldn’t have been the worst thing in the world if there had been a voice over explaining that she’s a space cop with the Kree and that all these other people are Kree and the entire society is run by a super computer that looks like Annette Benning. It also might have helped smooth over that some Kree, like Yon Rogg or Korath can pass for a human with pale or dark skin, but others have very obviously alien blue skin. Maybe thats why Kree hate Skrulls: a race where everyone looks completely different is probably suspicious of one where everyone can look exactly the same.

There is a problem in mystery story telling when the audience has more information than the character. We know just by coming in Vers is Captain Marvel and her amnesia is an obstacle to character development rather than a method of presenting it. There is a scene early on where, captured by Skrulls, she relives a few pivotal moments but they are flashbacks with an emphasis on flash. Her personality is there, but we’re not sure whats informed it until well into the movie when the fragments of her life start to fall into place.

One big fight later, she escapes and falls to Earth directly into 1995. Full disclosure: I worked for a time at Blockbuster Video and at Radioshack, so the nostalgia hit me harder than most when she begins tearing apart a strip mall so she can phone home.

For reasons that are not apparent, Nick Fury and Phil Coulson arrive at the scene. Does SHIELD have so little to do after the cold war that they investigate a break in at a Radioshack? This is made doubly sad when Fury rattles off his resume later in the movie and you try to think about how he got to be part of this? I’m going to be a good fan and assume they came on because Carol’s entry in the atmosphere was picked up on radar off-screen and they just happened to come at the same time as local cops.

This is about the time the needle drops start and they do not ever end. Elastica, Garbage, TLC, Nirvana, No Doubt, Hole… It is radio from 1995 boiled all the way down. Its cool when its played in a scene where it makes sense. But there are at least two spots in the movie where all I could think was that she’s been off world 6 years so even if she suddenly gets all her memory back, she has zero connection to this song. 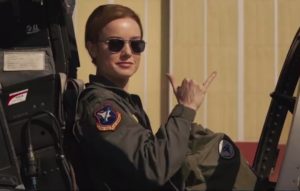 Fury finally catches up with Vers as she’s trying to place the memories that the Skrulls triggered. A short debate on how neither of them is the bad guy later and they’re off to find a secret military base. This is where after digging through files Vers realizes shes really named Carol and that the reason the super computer looks like Annette Benning is because it took the form of her mentor here. Also she had a cat, who has been living on this military base without a proper caretaker for 6 years.

Now they track down the one person who would have known her from before, Mario Rambeau. This is the part where my wife asked whether or not Carol is gay, because it is abnormal for one of these movies to be lacking a love interest and here we are halfway through and not only has Carol not shown interest in any of the men so far, she’s actually had a fight with every man she’s met. I’m happy to report that this is the first time a Marvel movie doesn’t have a love interest. Carol does not save a screaming man or woman at any point.

Now this is where the script gets flipped and if you haven’t seen the movie I’ll add another SPOILER warning. Skrulls are not the bad guys? This is an alien race that traces all the way back to Fantastic Four #2, created by Lee and Kirby, and usually represented as bad guys. It hasn’t even been that long in comic book time since The Skrulls actually tried to take over Earth, so it seemed like a obvious untapped villain resource here. However if you look at the animal kingdom there are certainly hunters that camouflage in order to catch prey, but there are probably just as many that disguise in order to avoid becoming prey. And Skrulls in the MCU are officially the latter. So Ben Mendelsohn breaks that streak of playing complete pricks he started in Rogue One and continues in Ready Player One.

Now the shit hits the fan, Carol gets the black box from the plane crash that gave her powers and knocked out her memory, and we set in motion taking her, Fury, Maria, the Skrulls, and the lovable cat into space.

As third acts go, this one isn’t too bad. By not having her memory and being chained by the Kree, her powers have been very limited up until this point. When she literally breaks free of the Supreme Intelligence, it opens up a virtually limitless bank of power. Carol beats the crap out of her former team and halts the Kree’s bombing of Earth. Maria gets a nice hero moment too, dog fighting with a space ship through a canyon that evokes Will Smith’s air battle in Independence Day.

When the smoke clears though, Carol comes back down to Earth to fight Yon Rogg one on one. He does a bit of patriarchal grandstanding, all but saying “DEBATE ME!” like some alt right troll on twitter.

And I think that is where the power of this movie lies. It would be a very middle of the road Marvel movie, which is to say still quite good. But my primary criticism of Marvel productions has been they rarely have any message or allegory to give the movie deeper meaning. They’re fun character stories and that is it. But this has a very relatable brand of feminism for the modern viewer.

Take Wonder Woman. In that film, Diana is raised by powerful women. When she joins the outside world, she is bewildered by the lack of respect women have. She is compelled to show her value and be an example to others. In Captain Marvel, Carol has been pushed down by men her entire life. Consistently told she can’t or shouldn’t do what she wants. This is what happens when she is tired of that shit. Even her relationship with Fury is dependent on her having a more dominant personality than he does. She has to dominate Samuel L Jackson in a movie and it works.

So that is why maybe reviews on this will be a little divisive. Because on its own merits it is merely a good movie. But, like Black Panther only a year ago, for the people who see and hear the message, it will be unmatched and inspiring.

Higher, Further, Faster. How high, far, and fast will depend on you.

I assembled the complete soundtrack for the movie. All available score and songs. Michael Giacchino’s studio fanfare has never been commercially released, so I’ve included a cover version.