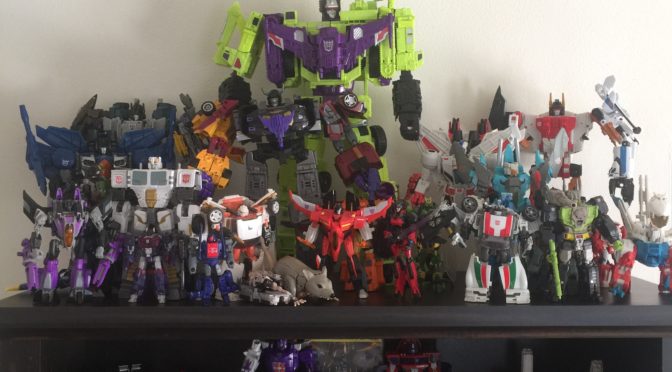 I had a party (you weren’t invited) last week and it gave me a good reason to clean up my toy displays and make some adjustments. 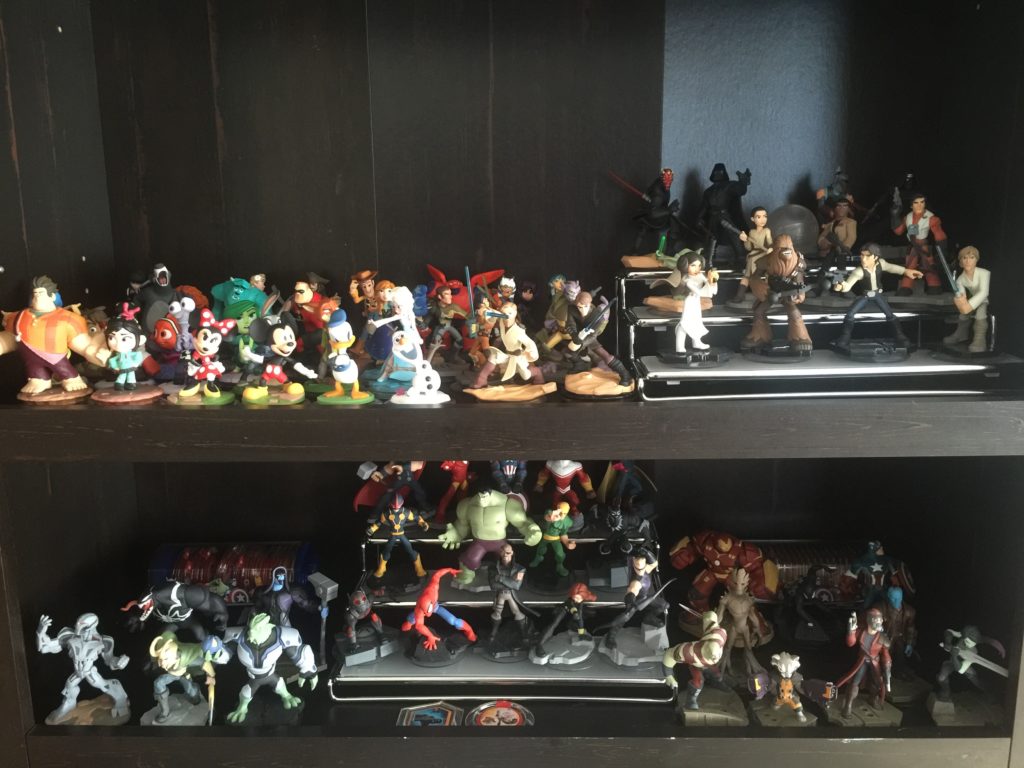 Thanks to the decline in Disney Infinity, I went whole hog and bought about as many of these figures as I possibly could find. I’m still missing a few I’d like to get, but the two shelves I have now sport a complete Marvel and complete Star Wars collection. My toy vice has never been either of those properties, so this was a fun itch to scratch and while it is disappointing we won’t get any more of these figures (especially considering the leaks of near complete but unproduced figures) It is calming and comforting to know this collection is done and I’ll never have to buy another one. Plus if I ever decide to sell it a few years from now I’ll actually be able to get a few bucks for it. Maybe. Probably not. One of the reasons this line died is over production.

The risers were an inspired choice. This dark wood bookshelf I’ve had for a decade and was a cheapo pickup at Walmart. Since I’ve got so many figures under 6 inches it doesn’t make sense any more. I’ll replace it sooner or later, but these little shelves are supposed to be for kitchen cabinets for spices. I bought 2 sets of 2 and still have one of them in (which I’ll probably put in the spice cabinet). They’re cheap, about $17 for a set but allow the toys to sit a little higher. This is more pronounced in the Transformers shelf where I’ve got some figures that are 3-5 inches tall and others that 9-12. 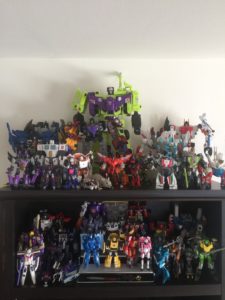 Trying to find a theme for Transformers has been hard. About a year ago I decided I wanted to just try for (modern) figures of character from the 1986 animated movie. Additions like Devastator and the recent Galvatron help fill that out along with Bumblebee and Prime I’ve had for a decade.
So the lower shelf is a lot of characters from that movie. I tossed the 2000 DVD release on the back shelf between Prime and Galvatron to emphasize. Top shelf is a lot of bigger figures and some lineups from the comics. Clearly the combiners won’t fit on the lower shelf and Devastator, Menasor, and Superion were a big part of the Combiner Wars comic so they’re all up there. Bruticus isn’t a movie character OR a comics character but he’s the best of the combiner toys so he gets to stay. That white “Battle Core” Optimus Prime I’ll eventually get stickers to convert to a Nova Prime. Starscream is positioned center with Rattrap and Scoop, honoring what is perhaps the most bizarre re-writes of characters I’ve ever read.

I tossed together a play list and hit shuffle for this party. We made it one song before someone turned it off and put cartoons on for the kids. Oh well. I get excited for stupid shit like this and it kind of crushed me to not listen to music. I’ve got no where else to put this so, enjoy. I just did a quickie itunes -> spotify conversion so theres probably 30 tracks that won’t work, skip around.