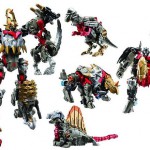 Another video for powet.tv
Power Core Combiners have been a wholly unintersting sub line of Transformers since they first popped up last year. They include absolutely 0% of classic characters, 0% comic characters, 0% movie characters, 0% cartoon characters. That adds up to 100% of nobody in this line of nobodies.
But I gave one set a chance anyway, since they were Dinobots. Not the real Dinobots, but some Dinobots.

I spent a long time actively searching for them. Some stores would have 3 dozen PCC sets on the shelf, and I would dig through every one to try and find Grimstone. Several times local fans tipped me to the set being on various shelves in certain stores, but I got no luck. By April of this year I had all but given up, but then found them at the same time I picked up Perceptor (a mere week after changing of the guard). This video was kind of a rush, not something I planned much ahead of time. I decided that since I had built up this set for so long and was finally opening it, I’d either capture excitement or disappointment. Its a shame it was more the latter.